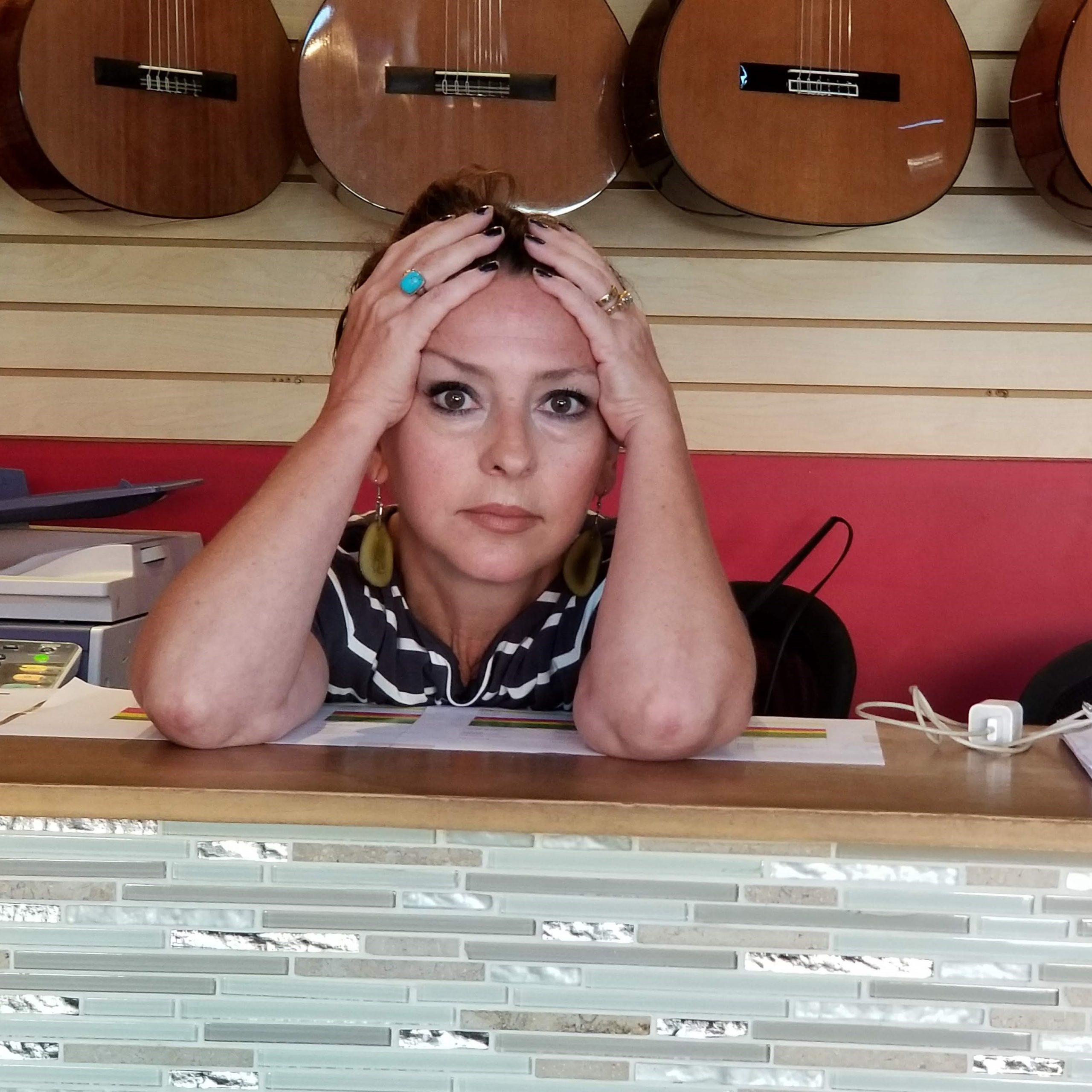 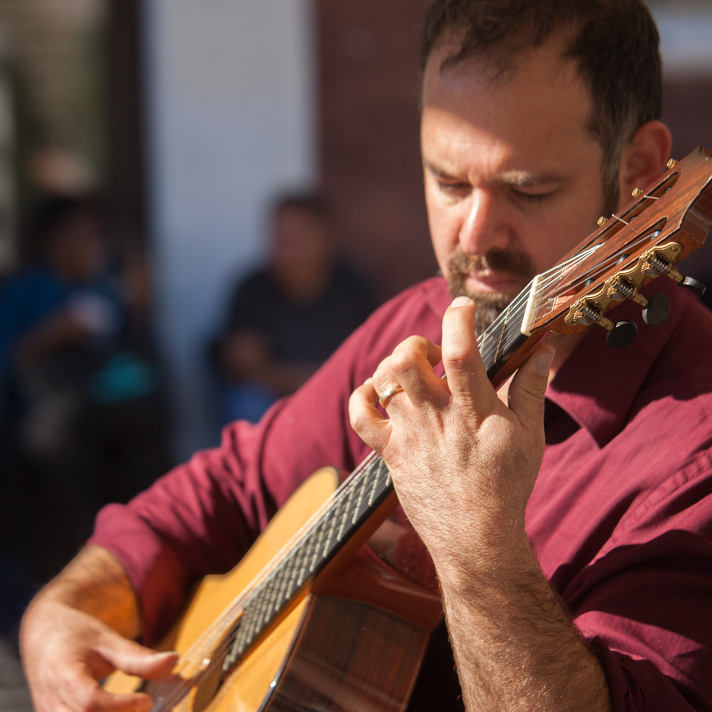 Israeli Classical Guitarist Maoz Ezra began his journey with the guitar at the age of 10. From the very beginning of his studies he was inspired by the great Masters of the guitar and composers, such as Andreas Segovia, Jullian Bream, J.S. Bach & Robert Schuman as well as his teacher, Yehuda Shryer, who shaped his musical taste and directed his passion for making music. After his military service in the Israeli Army, Maoz began to discover his own passion for teaching guitar.  He quickly established a studio of more than 30 students that he would travel to their homes throughout the Sharone area on his scooter to teach weekly lessons.

In the year 2000 at the age of 23, Maoz left Israel to go and study at the acclaimed “L’Ecole Normale de Musique”in Paris, France; to study with the great Alberto Ponce. In Paris, he immersed himself in his studies, had many wonderful performance opportunities and continued to develop a deeper understanding for the pedagogy of the guitar. He also quickly established a studio of private students all over Paris where he began adding performance opportunities for his students into his curriculum.  After the L’École Normale,”he finished his studies at the Conservatoire de Maurice Ravel with the great composer and guitarist, Atanas Ourkouzounov; which cemented his technique and brought to him the confirmation that he wanted to be a great Professor of the classical guitar, in order to bring the instrument out of the shadows of the classical world and make it more accessible for both audiences and music students. In 2004 Maoz took his first steps to establish his own, very unique teaching method, by beginning classes in an Israeli preschool in Paris with children ages 3 & 4.

In 2005 Maoz Ezra moved to New York with his soon to be wife, Soprano, Leilah Dione Ezra.  He was quickly accepted in the prestigious Manhattan School of Music with a scholarship for his Masters Degree in performance. While in New York, as he had done many times before, he quickly established a studio of private students, a calendar filled with performances and lots of plans for the future! Over the next couple of years, he had an opportunity to perform a solo concert in Carnegie Hall as a reward from the Artists International competition, a New York premier of a piece by Halim El dabh at the 92nd street Y as well as many other performances and by 2008 officially established his own Classical Guitar Conservatory, EzraGuitar.

Since 2008, EzraGuitar, has taught thousands of children about the art and great love of what it is to play the guitar.  Maoz’s great love for pedagogy inspired him to take on the challenge of starting students on the guitar as young as 4 years old; not typically done in the established guitar world.  Through his unique method of teaching, students are able to begin reading music, playing melody and performing from this young age, establishing a pure and organic connection to making music for life. As EzraGuitar now moves into its 14th season, it can now also be said that studying with this method has proven incredible results with our longest students, teenagers now, playing with college level technique, fearless in their repertoire choices and beautiful musicianship.

In addition to EzraGuitar being an incredible place to learn for students, it has also become a sought after institute to work for over the years.  EzraGutiar was established BY musicians, FOR musicians to pass on the knowledge to create the NEXT GENERATION of musicians.  The EG philosophy is to hire great guitarists, who have completed at least a Masters degree in performance, who have a high level of artistry and most importantly, a passion for teaching.  Once the right candidates are found they are trained by Maoz Ezra and senior staff members in the EzraGuitar method and then mentored throughout their tenure with EzraGuitar.  For a small family organization, EzraGutiar compensates its staff with some of the highest rates in New York city, as another part of the philosophy of EG is to honor and respect all that make this organization work, and do its best to provide a living wage to its teachers so that they can keep their focus on teaching and music.

Parallel to all of Maoz’s work in establishing and running EzraGuitar, he is also a prolific arranger and recording artist.  A complete list of his arrangements are listed on his website and will soon be available for purchase!  In the meantime, you can hear a recording, featuring many of his arrangements on his album: EAST, a collection of pieces by composers from around the world, all arranged for the guitar.

In the summer of 2020, Maoz relocated with his family to Raanana, Israel. In Raanana, they have opened the first International branch of EzraGuitar, in the hopes of bringing the joy of the guitar to yet another community of future musicians! 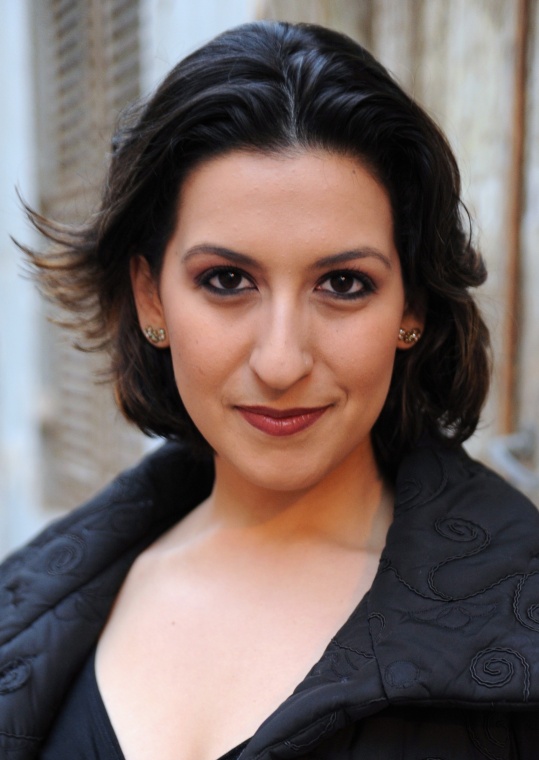 Spinto Soprano, has appeared on stages throughout Northern Italy, France, Israel, Canada and the New York metropolitan area in both opera and concert. Her most recent credits include: Cio Cio San in Madama Butterfly, Mimi in La Boheme, The Soprano Soloist in the Verdi Requiem, Giorgetta in Il Tabarro, Blanche de la Force in Dialogues des Carmelites, The Female Chorus in The Rape of Lucretia, among others.

Ms. Ezra has appeared as a soloist with the New Israeli Chamber Orchestra, the North Jersey Symphony Orchestra and in Carnegie Hall in a concert with her husband, classical guitarist, Maoz Ezra. She was also the soprano soloist with the Frost symphony orchestra on their album release“An American Dream,”a work by American composer Frank Ticheli, conducted by Zoe Zeniodi and released by Albany Records. In addition to singing, Leilah is the co-founder of the EzraGuitar Conservatory, with locations in Israel and New York City, bringing top level classical guitar and arts education programs to hundreds of students since 2008. Currently, Leilah resides in Raanana, Israel with her husband and their two fabulous daughters.